This is not an unusual sight out on the boat on Sardine Run. Cape Gannets are one of our great Sardine Bait ball detectors. Raining from the sky in swarms of hundreds of birds, these Cleopatra looking birds because they look like they have eye-liner make-up are easily recognized by their black and white plumes, gold crown as well as their size.

How fast do Cape Gannets dive?

Weighing in as light (or as heavy) as 2,6 kg’s the Cape Gannet (Morus Capensis) dives into the water at speeds of up to 100 km/h from a height of 30 m or thereabouts. Meaning they can dive as deep as 10m to attain their tasty morsels. 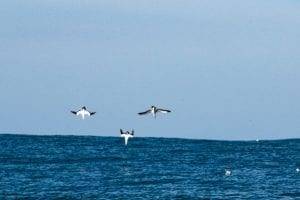 What are their breeding habits?

Being limited to around 100 km’s off the coast (The continental shelf), Cape Gannets are restricted to 6 breeding areas: 3 Islands off the Namibian coast, 2 off the west coast of South Africa and 1 (aptly named Bird Island) off the coast of Port Elizabeth.

These diving birds start breeding when juveniles return to their breeding colony in their 3rd year of life. The males entice the females with calls bows and head shakes. Once the relationship is established the accepting female responds by moving toward the male with her head tilting upward. They together commence the task of nest building primarily using guano (excrement). Other materials such as feathers and debris is added to the mix for sound nesting.

Very rarely is more than one egg found in a nest. These tiny bluish eggs weigh a mere 98 grams and are laid between October and December (spring and summer months). Incubation is approximately 45 days, by both parents, using their feet. Their foot webs clutch the egg and due to highly irrigated blood vessels, sufficient heat is passed to the egg.

Before it hatches, the gannet chick becomes vocal, warning the adults of their impending parenthood. Hatching at 70 grams and black, they grow quickly and outweigh their parents until they are fledglings by around 3 months old. They now also have brown feathers

Both parents are responsible for feeding, a chicks diet consists of mainly the regurgitated remains of anchovy and pilchard in the normal “feed-me” mouth to mouth manner that we know.

How do Gannets hunt?

This is the fun part, the part that attracts us to them on the annual sardine run migration. They are highly skilled fliers and can maneuver most natural elements and ocean conditions.

They are so highly skilled in their control of speed and weight makes for spectacular precision in hunting. Gannets keep their heads titled downward.

Flying at a height of between 10 m and 30 m above the ocean, depending on conditions. While doing this they are prowling and scanning for prey in the depths. Once they find their prey, in our case, shoals of sardines, they keep stationary above their prey. In one swift motion, they flex their wings, point their tails and feet and aim straight for their scurrying prey. It takes a split second for them to stretch and (almost dislocate their shoulders) turning them into a harpoon as they enter the water. They are capable of grabbing their prey on their way down or on their way back up and eating it by the time they hit the surface. 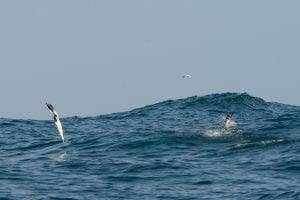