Counting Down the days!

The Countdown has begun to Sardine Run South Africa 2019, in just 1.5 months we’ll migrate to Port Saint Johns. The reason we go to Port Saint Johns is that this is where the continental shelf is closest to land.The Annual Sardine (Sadinops Sagax) migration against the warm Agulhas current and counter-currents along Port Alfred, Port Saint Johns and Durban assist the Sardines moving north. “This passage control mechanism has been coined the ‘Waterfall Bluff gateway’ hypothesis” Scientists are continuously doing research on the whole phenomenon. 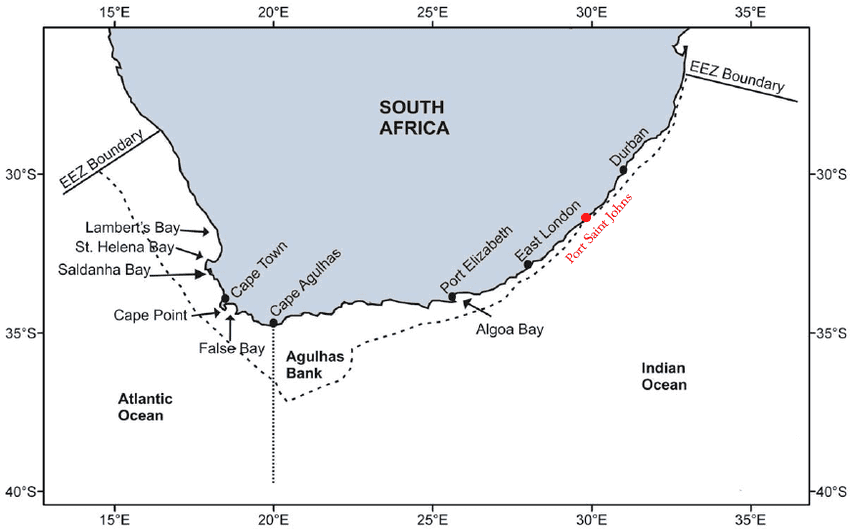 The dotted line indicates the Continental Shelf of South Africa

Nobody knows where they disappear to when they move into the depths, seemingly leaving the inshore area around Richards Bay. What we do know is that the Sardines bring with them predators and photographic glory. They start at pretty much the point of Cape Town moving all along the east coast of South Africa. The theory is that this is a spawning migration rather than a feeding migration.

Water temperature has an adverse affect on the migration of Sardines. Water temperature of the Agulhas current runs around 24 and 26 degrees celcius. The previously mentioned counter-currents run at around 2 – 4 degrees lower than this. We recommended that you wear a 7mm wetsuit for any in-water activities. 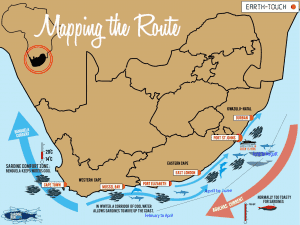 Some of the predators you can look forward to meeting in the Pondoland (Port Saint Johns and surroundings) waters are Dusky Sharks, Bronze Whaler Sharks, Oceanic Black Tip Sharks, Ragged Tooth Sharks (on the reef dives), occasionally Orcas (killer whales) and Great Whites, Mola-mola, the odd Sea Lion, for sure the Common Dolphins, Bottle-nose Dolphins, Pan-Tropical Dolphins, Brydes Whales, Cape Gannets, Wilson Storm Petrels, game fish: Mackerel, Tuna, Shad, Bonito and Geelbek. Contrary to popular belief, the Humpback Whales you see on Sardine Run South Africa are not there for feeding but their own migration north to calf coincides with that of the Sardines. Albeit that they may get a tasty morsel along the way, their diet consists more of krill.

Book with us today to be part the Greatest Shoal on Earth.